Big Potential: Understanding the Many Uses of Warehouse Space 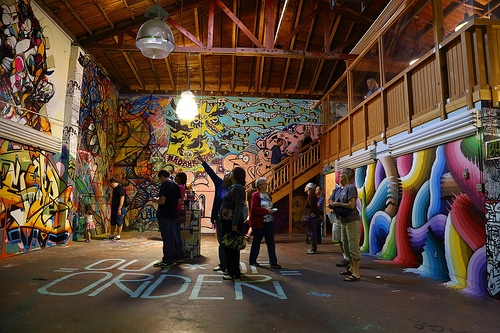 In this case, a former warehouse has been converted into an art gallery. Industrial space is often available at a good price, is highly flexible for development, and can be built more quickly and affordably than other traditional office buildings. Credit: Flickr user Don McCullough

Developers in Culver City recently did what many entrepreneurs have done in California: they saw potential in some warehouse space that was for sale. The firms bought a former 30,000-square-foot building and plan to turn it into an office building.

These developers have good reason to be optimistic about the project. In the depths of the Recession, the same group converted several buildings into offices just down the road from Culver City at a former furniture manufacturing plant. The campus has out-dueled higher-priced, traditional office buildings in Santa Monica. To date, according to reports, several media companies have leased 90 percent of the 150,000 square feet.

These are examples of warehouse spaces that have successfully been converted to offices, but that’s just one potential use for these buildings.

Just this past year, for example:

In all of these cases, owners found new uses for old warehouse space and industrial buildings that would otherwise sit empty and blight a neighborhood. Buyers or lessees have many reasons to take a hard look at these properties. Old warehouses and industrial spaces are often available at good prices in areas where manufacturing and industry moved away. Secondly, they are highly flexible spaces that can be adapted for practically any purpose.

In Milwaukee, for example, a developer plans to turn a large former industrial property last used by a printing company into several small, light-industrial spaces, such as a microbrewery, woodworking shops, and metalworking shops. In an earlier post, we mentioned that one California charity managed to convert an old warehouse in Los Angeles into an office building that was featured for its innovative use of space alongside the much more expensive Google and Facebook buildings. The charity paid significantly less per square foot than it would have paid if it had built the same space from the ground up.

Admittedly, however, there are risks in converting an industrial or warehouse building. One recent trend in cities, for example, has seen former warehouses converted to condominiums and upscale houses in places where large open buildings aren’t typically available, such as in the downtown cores of Manhattan, San Francisco, and Chicago. These buildings can be a challenge to renovate. Often the plumbing, electrical, and heating systems need to be replaced. Industrial buildings and warehouse space can also have environmental problems, such as lead-based paint and asbestos. They can be located far from major transit routes making them inconvenient for users to reach, or near other industrial complexes, which may be noisy and unsightly. Also, most look like an industrial building from the outside, which may be off-putting for some companies, depending on their purpose.

The Advantages of Warehouse and Industrial Space

That being said, we see several advantages to converting warehouse or industrial space. Here are three:

Warehouses are often easy to adapt: The open floor plans are easier to modify than a traditional office building. Just as a warehouse can be transformed into a school, office, condominium, or a sports facility, they can also be customized for any of these uses to meet the particular needs of the new owner. Warehouses can also be built from the ground up more cheaply and quickly than other commercial building types.

Warehouses usually have more potential space than meets the eye: Because the ceilings are high, an owner or long-term tenant sometimes has the option to build a new floor, meaning warehouses potentially have nearly twice as much usable space.

Warehouses usually have flexible zoning: Often the owners won’t have a problem getting approval to modify or use the facility. Since it was a former industrial building, any retail, classroom, or office use would likely be viewed as a lesser impact. Office and retail buildings, on the other hand, are often zoned for specific purposes.

For these reasons, nonprofits, private companies, schools, and real estate investors can potentially find an opportunity to develop former warehouse space. At the least, they shouldn’t rule them out. While there will be opportunities, the potential buyer or lessee needs to evaluate the property carefully and weigh all the options. As with any commercial deal, this shouldn’t be attempted alone. When considering an old warehouse or industrial property, always seek help from a professional team that includes an experienced commercial real estate consultant.

If your company is considering purchasing or leasing a warehouse or industrial space, you don’t have to go it alone. You can get a thorough analysis of the property value and facilities from a consultant whose community values align with your own. Contact DCG Real Estate today to learn more.