Protect Your Assets: Test for Environmental Problems Before Purchasing Property 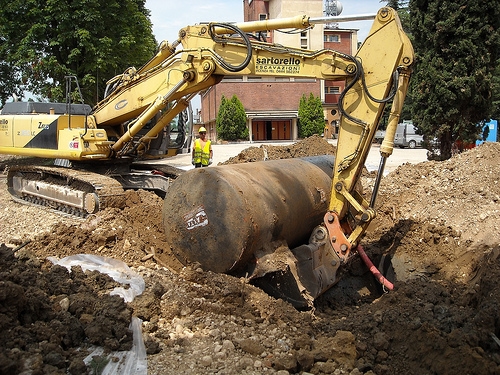 I’ve just read a story about a nice church with a bad environmental problem. It happened in Geneseo, Illinois, but could easily have taken place here in California. The Church of Promise owned a historic, though tumbling-down, 90-year-old schoolhouse, an eyesore that it wanted to tear down. However, they couldn’t tear the building down until they removed the asbestos used in the building years before. And unfortunately, they couldn’t remove the asbestos, either, as the bill would be a steep $130,000, which they couldn’t afford.

So, the building sat as a big liability. The church had no good way out of this, except to pray that the government stepped up with tax credits or that some private soul came along to buy them out.

It’s a bad situation to be hit with a large environmental bill. Potential problems can lurk under the surface of any deal. Issues can be former spills, poor water quality, leaky underground storage tanks, asbestos, and lead paint. Without thorough environmental testing to catch these issues before they start, those who can least afford it are often stuck with some very big bills.

Environmental problems can cause trouble for any organizations working with property. In the city of Baltimore, for example, an agency that ran housing projects in the inner city was financially secure for years, until a civil jury awarded $2.5 million to two children who had been poisoned by lead-based paint on the walls of one of the apartments. After that judgment, a flurry of other lawsuits followed against the non-profit, ultimately forcing them into bankruptcy.

Granted, this Baltimore case is an extreme one, but environmental problems are rarely cheap and easy to fix. In High Point, North Carolina, for example, the First Baptist Church Cathedral was trying to raise $35,000 this past summer to save its historic stained-glass windows, fearing that the heavy equipment needed to strip out asbestos pipe and floor tiles would cause the 107-year-old sanctuary to collapse into a rubble pile. $35,000 requires more than a few bake sales.

Be Prepared with an Environmental Assessment

In most cases, a buyer of commercial property will find no major issues. However, it’s worth spending the money to know what’s going on. An environmental assessment of the land has become a standard part of many commercial deals. A contractor typically checks the property records for past permits and industrial activity, conducts interviews, and does a site visit. This first look often rules out the need for more testing, but it may uncover potential problems, such as buried fuel tanks or the need for soil and other ground testing. Also, if a big environmental problem is discovered after the land is sold, the new owners have a good legal case that they are not responsible for the cleanup because they did a thorough investigation, and the prior owner did not disclose the problems.

Be Aware of Common Problems

Churches and nonprofits should also be especially aware of three common environmental problems in older buildings:

Underground Storage Tanks: An estimated 575,000 underground storage tanks nationwide hold oil, gas, and hazardous substances, according to the Environmental Protection Agency. Some tanks under the ground were never designed to be buried, and begin to rust and leak after a decade. It can cost more than $3,000 to remove a tank, but the cost of testing and cleaning up spills can run significantly higher.

Asbestos: Until the mid-1970s, when its microscopic fibers were linked to lung cancer and other diseases, asbestos was a standard material used in tiles and insulation. Asbestos isn’t dangerous unless it gets disturbed and crumbles. However, buildings with asbestos are hard to renovate or demolish. Removing asbestos can be expensive. Typically the owner would need to hire a trained inspector to survey a building and an asbestos contractor to remove it.

Lead-based Paint: Millions of homes and buildings built before 1978 have some lead-based paint, which poses a danger particularly to children. It is often found under layers of fresh paint and isn’t dangerous unless it gets chipped, dampened or chalked. The cost to remove it from a standard-sized house can run anywhere from $9,000 to $30,000.

Get Help from a Trusted Consultant

It is easy to see why churches and nonprofits might be tempted to blow off environmental testing. They may be gifted an old office building, or accept a century-old schoolhouse for next to nothing, thinking it will be an asset. But if they find an environmental problem later on, they will own that problem, too. That’s why it’s essential that they partner with a trusted consultant who can help them identify and resolve any potential environmental issues with their property.

If your organization is exploring new property, you don’t have to go it alone. You can get a thorough property assessment – including an environmental assessment – from a consultant whose community values align with your own. Contact DCG Real Estate today to learn more.