The Case for Innovative Office Space: One Size Does Not Fit All 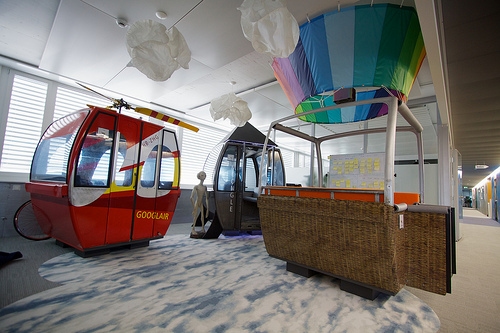 With ever-expanding California tech companies like Google and Facebook here in our backyard, it’s easy to forget that U.S. firms recently shed more office space than at any point in recent times. After the recession kicked in, tenants began pulling out of office space, with office vacancy rates reaching 17.4 percent in the second quarter of 2010. That’s the highest vacancy rate since 1993.

However, it wasn’t just because the economy stank. At the same time that firms were laying off employees, they were adopting open-floor office plans, shrinking cubicles and side offices, going paperless to rid themselves of bulky storage rooms, and allowing employees to work remotely.

Because these moves started happening before the recession, we don’t believe that the pressure to reduce square footage and pack people into tighter spaces will end with an improving economy. Office space is usually the second largest expense after employee salaries. During the downturn, some companies adopted “dense packing” tactics to shed up to a quarter of their square footage, squeezing employees into smaller areas, pushing work stations together, and eliminating conference rooms and private areas. All of this was done in the name of efficiency and cost savings, which they’ll hope to maintain, regardless of the economy. We understand why companies become obsessed with the idea of squeezing productivity out of every square foot, but we also think that this can be shortsighted.

Many companies are taking a much broader view of what represents productive space in an office building. It’s important that it reflect the company culture and consider the functions of their various employees, and not only financial efficiency.

Innovative Office Space Does Have Value

A case can be made for creating pleasing, innovative spaces in the modern office. Admittedly, the value of this space is not something that can be measured on a balance sheet, like the cost of a square foot. However, when companies design offices in creative ways that take the workers into consideration, it helps retain employees and attracts top talent, in addition to improving productivity. Some companies may have adopted open layouts that shrink the size of cubicles and side offices, but they have not necessarily scrimped on their overall square footage.

So what does innovative space look like? It can be adding cafes and lounge areas, where workers can unwind, relax, and even collaborate. For offices with open layouts, it can be building in “phone booths” and small rooms where employees can escape from distractions and make private calls, without sacrificing the public space required for impromptu brainstorming. It can involve a twist on the cubicle, using see-through glass partitions that give the overall office an open feel, so employees don’t feel isolated, while also allowing them the semi-privacy of walls and a sliding glass door that can be closed.

As proof that compact size isn’t the only way to increase the value of your office space, check out these three companies that chose to design their spaces around the needs of their employees and the values of their various company cultures:

Obviously not all of the above layout ideas will be relevant to your company. However, they do reflect the need to consider your employees and the work you do in order to design an office space that will be the right fit. Whether an open-plan office with its fraternal atmosphere or the traditional office with its rows of private cubicles is better suited to your work, the important part is that you allow your space to reflect that work, rather than merely striving for the smallest space, as so many companies do.

An office is a second home, where many people spend a third of their lives. Even with all the pressure to eliminate square footage, a company shouldn’t automatically look for the tightest option that appears the most efficient, but leaves employees miserable, less productive, and looking for work elsewhere. If you don’t take your company’s unique needs into account, you’ll be doing yourself a seriously inefficient disservice.

If your business is exploring new office space options, you don’t have to go it alone. Turn to a real estate company that knows how to find the right fit for your unique business. Contact DCG today to get started.