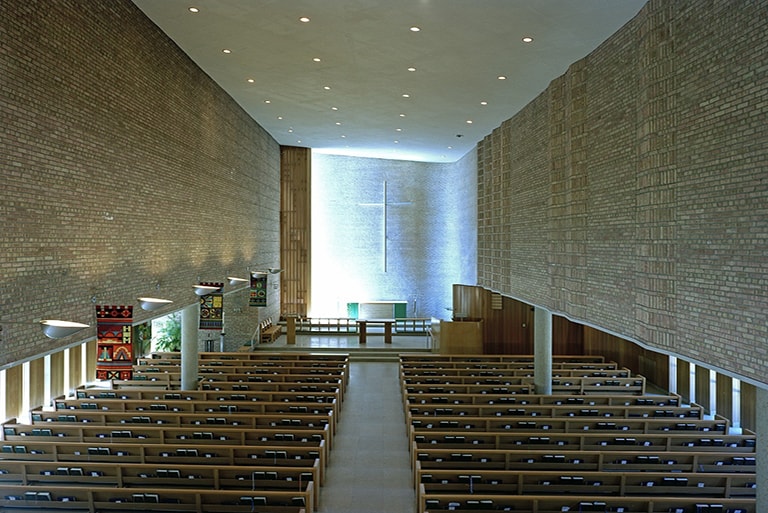 American churches are finding that their buildings are no longer the community social landmark they once were. A decrease in faith is partially to blame; the percentage of adults who identify as Christian dropped from 78.4% in 2008 to 70.6% in the latest Pew survey. The greatest decline can be seen in mainline Protestant churches such as Lutherans and Methodists. And almost 23% of U.S. adults now say they are religiously unaffiliated.

There’s also a generational divide between those who consider themselves religious and those who don’t. Baby Boomers, born between 1946 and 1964, still make up the largest share of Christians at 35%. Nearly half attend church services once a week. Their Millennial children and grandchildren are less likely than any other generation to consider religion an important aspect in their lives. Those who do make up 23% of Christians, and only 41–43% report weekly church participation.

While those numbers might not seem alarming, it’s important to note the difference between how often people say they attend church and how often they actually do. Some sources report church attendance as low as 17.7% of the population on any given Sunday.

A Loss of Funding

This drop in religious identity is coupled with an overall decline in financial giving to religious institutions. In 1990, half of all charitable donations in the U.S. were made to churches and other religious establishments. As of 2016, however, that share fell to 32%. Religious leaders say that younger people are less constrained by tradition and no longer feel obligated to donate money the same way their parents did.

All of this means that churches are having to adapt to aging, dwindling congregations that may contribute less financially than they once did. The loss of funding and a thriving community makes keeping and maintaining expensive church buildings difficult.

Perhaps not surprisingly, churches are dying in large numbers. Between 6,000 and 10,000 U.S. churches are closing their doors every year. Some are changing their organizational models to become less reliant on a permanent building, holding service at venues such as local high schools. Some look to the wider community for support and successfully share their buildings, coworking spaces, and meeting rooms with other profitable and nonprofit businesses. Others are forced to sell their buildings, which are often repurposed as apartments and condos in high-value rental markets.

So What Can Churches Do?

If your church has vacant buildings or property, there may be ways to recoup the economic benefits lost on unused real estate. DCG Strategies can help you decide whether leasing or developing the property is an option. If it’s foreseeable that your church might close, selling the property might be in your best interest. DCG has plenty of experience working with nonprofits and religious institutions, and we understand that every case is unique. Contact us to schedule a consultation and we can help determine a feasible and creative solution for your situation.