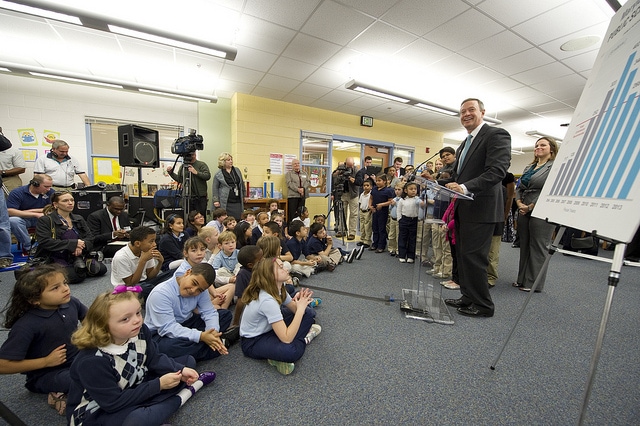 By now, you have probably heard that Facebook Founder Mark Zuckerberg famously donated $100 million to schools in gritty Newark, New Jersey. He recently followed that up with a pledge to contribute $120 million to California schools in the Bay area.

While these massive donations got lots of news coverage, a lesser-known story in California is just as telling of how common private donations have become for public schools.

Facing a big state funding shortfall four years ago, San Marino Unified schools handed layoff notices to a third of their teachers. Residents of the Los Angeles area community responded by raising $3 million in nine weeks. This is a good example of how California cities have rallied around their schools when state funds dry up. But perhaps even more interesting is how the superintendent characterized his district when interviewed by a local reporter. He said, “We call ourselves a semi-private school district.”

What Is a “Semi-Private” Public School?

The key word here is “semi-private.” That was absolutely true in 2010 because roughly 40 percent of the San Marino district’s funding that year came from private sources. That statement is also true of many school districts across the country.

Here in California, public school districts have led the nation in raising money privately to support their programs. According to the most recent available statistics from a Public Policy Institute of California analysis, K-12 foundations, PTAs, and booster clubs raised about $1.3 billion in 2007, which was up from $70 million in 1989.

Of course, the practice of using private funding in public schools is controversial. Some surveys suggest that the money has tended to flow away from traditional public schools into publicly funded, independent charter schools. Districts are also wrestling with basic questions of fairness and equality, due to the fact that wealthy neighborhoods can raise lots of money per pupil in some California districts, while poorer ones cannot. It is important to recognize that this debate is ongoing in the state.

We see an opportunity for districts to use private funds to help pay for facilities and programs. Briefly, let’s look at some of the available options:

Corporate Titans Give Generously: Foundations bankrolled by billionaire corporate titans, such as the Walmart heirs and Microsoft founder Bill Gates, have given generously to support the charter school movement. The Bill & Melinda Gates Foundation, for example, recently announced a $22 million investment to help create 20 new charter schools serving about 8,000 students.

Non-Profits Raise Money for Public Schools: It may sound surprising, but it’s true. For example, DonorsChoose, which was founded by a former Bronx school teacher who counts Bill Gates and Stephen Colbert as friends, has raised more than $225 million and funded a reported 400,000 projects, ranging from buying school supplies to building a playground.

Local Foundations Raise Millions for Schools: Local school foundations are still the engine that keeps many California districts going through hard times. The Palo Alto Partners in Education foundation, for example, raised $5 million this past year for Palo Alto schools, funding 22 art teachers, among other things.

One of the key reasons schools are fundraising is to be able to afford facilities that create the proper environment for learning. Studies have shown that sub-par facilities demotivate students and encourage feelings of defeat, whereas upgraded or newer facilities encourage a mindset of optimism.

It’s important for districts to be aware of every possible option when it’s time for a new building or major upgrades to existing ones. Some districts are proposing school bonds, which are often unpopular due to the requisite tax increase. Others are turning to joint-use agreements, but they are a far more limited source of funds. While getting a bond on the ballot may be one way to get that new library, private funding is, according to many, the most desirable option.

But wealthy donors don’t grow on trees, and because we don’t expect the financial pressures on school districts to end, schools need to think creatively about fundraising and maintain active outreach programs to donors. Doing so begins with having a clear understanding of your assets, all needed improvements, and plans for implementation. A comprehensive analysis of the school’s existing property can help you develop a long-term plan that strategically utilizes your private funding and maximizes the value of your facilities.

That’s where DCG Real Estate can help. If you’re exploring facilities upgrades, even if you’re at the very early stages, you don’t have to go it alone. With years of consulting experience, DCG can support you from your initial property analysis to the final step in your project. Schools are the backbone of our community and we pride ourselves on providing them with the personalized real estate development services they need to continue providing for our children.

Contact DCG Real Estate today to learn more about how we can assist you.