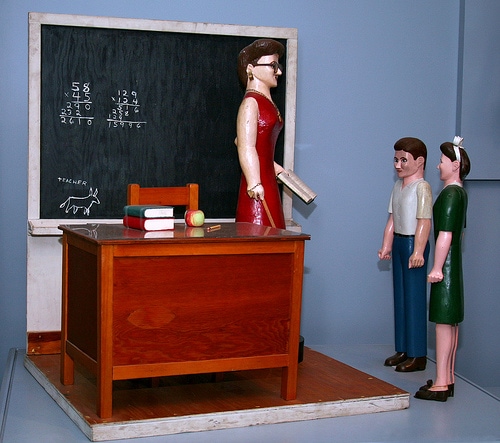 Opinions vary widely on what the 21st Century School should look like. It all depends on the school’s vision.
Image source: Flickr CC user Cliff

In Washington, D.C., a school district recently took what it felt was the fastest route to get the word out to students that it was now acceptable for them to bring their smartphones to class: the school district tweeted them. The district ended an all-out ban on mobile devices in the classroom in 23 high schools. Why fight against the current of the times? After all, their kids and most kids who attend a 21st Century school surf the Internet on their phones to discover what’s going on. Just as the blackboard went out of fashion, so too should this idea that students should leave potential learning tools in the locker. Or so the district believes.

But here in California, in the land of Google and Facebook, the Waldorf School of the Peninsula has a different vision. Not only do they not allow their students to bring gadgets to class, you won’t find much technology in their classrooms — no computers, no Internet-accessible whiteboards, no PowerPoint. Teachers scrawl out lessons with colorful chalk on a blackboard. Kids draw pictures with crayons and scribble down notes with pencils. Parents are also discouraged from letting their children use gadgets at home until after the 8th grade. This alternate vision of the 21st Century school has appeal, too. Tech-friendly employees of Google and Facebook are among those spending $24,000 a year per pupil in tuition for their kids to attend.

The question is, who is right? Should classrooms be wired with the latest technology and the kids encouraged to grab facts and data with every tool out there? Or do those gadgets stifle creativity and critical thinking and leave kids with an attention span as long as the next flashing image on a computer screen?

This is just one of the many hard questions that ultimately go to the bones of the debate on what a 21st Century school should look like. While we can’t say which of these schools has made the right choices in the classroom, we do strongly believe that a school’s philosophy and choices – its vision – mean everything in determining what sort of facilities and property these schools will need. We also believe the 21st Century school faces inevitable questions when working out a vision. Let’s look at three major ones: technology, community involvements, and “going green.”

Technology in the Schools: How Much Is Too Much?

Around the country, the debate is on regarding whether school districts have made a huge mistake by wiring up their classes and leaning on gadgets to educate kids. Some educators believe that traditional computer labs, with rows of terminals, are a waste of space and money, and technology should be at a kid’s fingertips on a classroom desk. One school in Connecticut, however, decided to keep a dedicated computer lab, but got rid of all but two Apple computers, and installed a wood working bench, a 3-D printer and scanner, and a MakerSpace unit, where the kids design models of volcanoes and other cool things. Technology isn’t going away. According to one recent survey, some 51 percent of kids are carrying cell phones and other gadgets to school every day. It seems reasonable to assume that more gadgets are coming, and in 10 years, today’s new technology may look as sophisticated as a game of PacMan or Pong. This means schools have an endless number of technology questions that they must answer.

How Do We Let the Community Inside These Walls?

Few communities, especially ones that have recently footed the bill for fields or an auditorium, are willing to accept their school as a locked box to be visited twice a year at the parent-teacher conference. Some schools in California now resemble community centers after hours. Schools regularly open their fields and facilities to the public, recognizing that the taxpayers have paid for them. Sometimes it works the other way, and the school gets the benefit of a community project. For example, in an upscale suburb in Los Angeles County, the community opted to build tennis courts at the school rather than disturb the environment in a 75-acre park. Joint-use agreements, while potentially legally complicated, are now common in the state. This can be an opportunity for schools to partner with their communities to create better facilities for the kids. However, it all starts with a question: How much do the school and its community want to cross those walls?

Going ‘Green’ Is Not a Choice, But How to Go Green Is

Most people love the idea of going green, and people now expect that their public buildings will be efficient and environmentally friendly. Green initiatives can also save a school money. Los Angeles schools, for example, hope to shave $112 million off their utility bill over the next 20 years by installing solar panels on 52 school campuses and seven other facilities. However, as much as green initiatives are popular, they often aren’t cheap and easy to pull off. In 2012, the Huntington Beach City School District had to abandon its plan to mount solar panels on a school roof when it discovered the roof wouldn’t handle the weight. When the school proposed putting them on the front lawn, the students protested. The school eventually found a solution, but the project turned out to be much more difficult than first imagined. If going green isn’t really a choice anymore, efforts to go green can take many directions. Districts need to look carefully at the costs and benefits of the projects.

The 21st Century school can be practically anything. Who has the right vision? That’s up to a school community to decide. Questions about the proper use of technology, about how to connect a community to the school, and how to make the buildings sustainable and environmentally friendly are questions of vision, and they’re very important questions. A school’s vision drives a school forward and determines its needs, including its building and property needs – not the other way around.

If your school district is pulling together a facilities plan for your 21st Century school, you don’t have to go it alone. You can get a thorough analysis from a consultant whose community values align with your own. Contact DCG Real Estate today to learn more.