Mingling with the Private Sector: How Government Buildings Can Spur Mixed-Use Development

San Diego is embracing a mixed-use City of Villages strategy, which is something that can help government real estate needs. Image source: Wikimedia Commons. There are two distinct, seemingly opposite, but intimately related trends in 21st-century American life, and both affect the fate of government real estate. The first is the growing desire to automate

Serving the People: The Role of Public Space in Government Buildings

The public space is an area to relax and mix with the rest of the community. Image source: Wikimedia Commons Walking around any city center during lunch time on a nice summer day, you’ll see office workers liberated from cubicles and deadlines eating lunch in an open plaza of some kind. They’ll be spread out,

Sometimes, state, federal, and local tax incentives are the perfect finishing touch in motivating a company to start up a business or to choose to relocate to another area. Image source: Flickr CC user Horia Varian Some people believe that only nonprofit businesses can get tax breaks and that for-profit businesses are on their when

Numerous historic preservation programs are completed each year. Here, 1,700 windows were replaced in a historic maintenance building at the Pearl Harbor Naval Shipyard. Image source: Flickr CC user NAVFAC It is always nice to hear that a historic building was saved from the wrecking ball. These fading landmarks can be lighthouses, military bases, churches,

The main building in the Kane County Government Complex in Kane County, Illinois. Image source: Wikimedia Commons There is a saying among fans of some architecture schools that form should serve function and the design of a building should be aligned with the building’s purpose. This often comes to fruition as a gray, excessively utilitarian

Waiting at the DMV and other government agencies can seem like an eternity, but it doesn’t have to be that way. Image source: Flickr CC User Omar Barcena There’s an inherent paradox when it comes to government buildings. They are there to serve the public and perform vital services that would otherwise become an unregulated 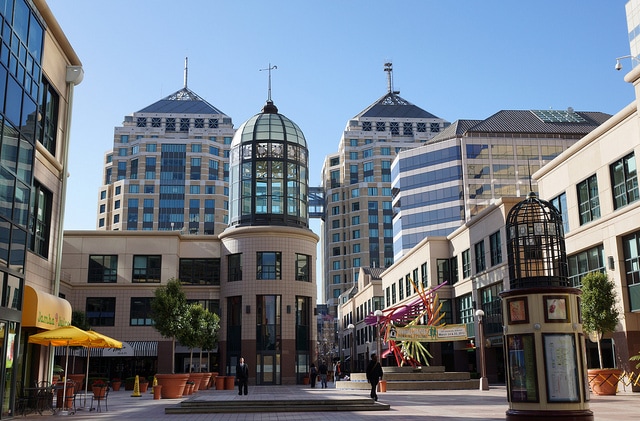 The Oakland City Center, connected to BART, is an example of transit-oriented development helping to spark urban reinvention.
Image source: Flickr CC user Allie_Caulfield When the history of 20th-century urban development is written, one of the hidden key factors will be the development of shopping malls. Though they are now often reduced to kitsch and mocked as sterile, malls had a dramatic impact on cities and inner suburbs starting in the 1970s (not to mention the economically positive impact they had on the the often barren areas where they were built). Suddenly, there was a space where businesses could go that had hundreds or even thousands of free parking spaces. Stores left downtowns and main streets for less-expensive rent and easy access by consumers. Many municipalities took decades to recover, if they ever did at all.

Finding the Best Locations for Those Who Serve the Public

A pleasant and accessible building is crucial for government agencies looking to serve the public. If you work for a local government or a government-affiliated agency, you know that when people turn to you they are usually in need of help. They want to start a business, or help a family member in need, or

Dutra Cerro Graden (DCG) will co-sponsor an interactive workshop for city leaders to help them create property management plans that both satisfy the requirements of AB 1484 and benefit their city in the long term. Other sponsors include California Redevelopment Association, California Association for Local Economic Development (CALED), Management Partners, Goldfarb and Lipman LLP, the

Dominic Dutra recently left his seat on the Fremont City Council after a four-year term of service. His decision to forgo campaigning for a second term in favor of business and family matters was somewhat surprising, but does not necessarily signal the end of his public service. TCV asked Dutra about his term on council

Article from The Oakland Tribune Published June 2006 Councilmember Dominic Dutra was doing exactly what he said he would. On vacation this week with his wife, Lisa, and their two children in La Paz — a coastal town in Baja California, Mexico — Dutra was a long way, literally and figuratively, from the Council Chambers